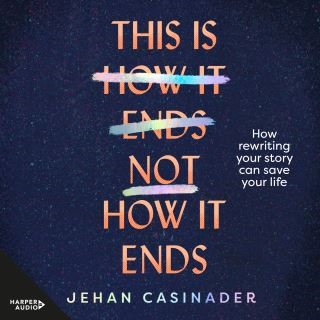 This Is Not How It Ends

As an award-winning TV journalist, Jehan Casinader told other people's stories - until he lost control of his own. Severely depressed, he tried everything - from mindfulness to massage; Prozac to Pilates. Was something missing?

This Is Not How It Ends chronicles Jehan's four-year battle with depression, and how the power of storytelling helped him to survive. He argues that many of us think our brains are broken, but in fact, our stories are broken.

Jehan began an experiment on himself. Could he rewrite his past? Could he reinvent his character? Could he create a whole new plot?

This gritty, vulnerable book will challenge readers' understanding of mental distress, and give them the tools to reshape their own life stories.

Jehan Casinader is one of New Zealand's leading journalists.

From a young age, Jehan was determined to build a career in the media. He filed his first story for TVNZ's Holmes programme at just 13 years old.

During his teens, he contributed to newspapers and magazines. By 20, he was travelling overseas, reporting from red carpets, disaster zones - and everywhere in between.

Jehan has worked in the fast-paced world of primetime TV for a decade, including long stints on Sunday, Seven Sharp and Close Up.

Specialising in social issues reporting, he has covered tough stories, like the Christchurch terror attack, the under-reporting of sexual trauma in men, New Zealand's plastic crisis, the ethics of killing zoo animals, and the rise of medicinal cannabis.

Jehan has interviewed people from all walks of life, including murderers, athletes, cult leaders, celebrities and Prime Ministers - giving him a unique perspective on the qualities of the human spirit.

He also created and hosted TVNZ's first-ever mental health series, The Inside Word.